Industry and government agencies are planning a pre-emptive strike on the Brown marmorated stink bug.

They have applied to us to release an organism new to New Zealand – the Samurai wasp – to combat any Brown marmorated stink bug invasion. We are seeking public submissions on this application. 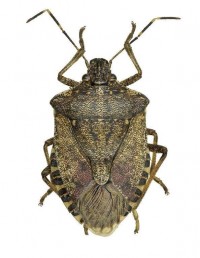 The applicant – the Brown Marmorated Stink Bug Council – includes groups representing the avocado, apple and pear, kiwifruit, tomato, vegetable, and wine industries and MPI. In the USA and Europe the stink bug has caused severe economic damage to horticultural crops, and has invaded homes during the cold winter months.

The Stink Bug Council says a report by the New Zealand Institute of Economic Research shows commercial crops at risk from the stink bug have an annual sales value of $4 billion. They include pipfruit and summerfruit.

Biological control by the wasp is likely to be the most effective long-term, sustainable and socially acceptable means available, the Council says. The alternative, used overseas, is increased use of broad-spectrum insecticides, often at high application rates.

The Samurai wasp doesn’t sting and is harmless to humans, but attacks and kills stink bug eggs.

The trigger point for releasing the wasp would be detection of a stink bug invasion or an established population. Rapid release of a squadron of wasps is critical to successful eradication, so the Council is seeking pre-emptive approval, so wasps can be launched as soon as the balloon goes up.

All the information about this proposal, and links to the submission form can be found in our public consultations section, or at the link below.

Get in touch with our media team.