New Zealand farming’s vulnerability to Chilean needle grass may be reduced if an application to release a rust fungus from Argentina wins approval. 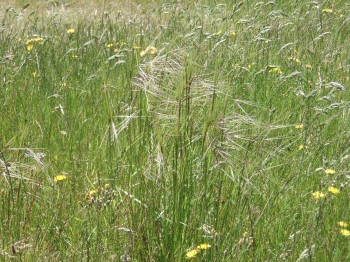 Chilean needle grass is found at some 300 sites in New Zealand, covering around 4,000 hectares. But research suggests up to 15 million hectares may be potentially at risk.

Chilean needle grass is common in Australia and has caused production losses of up to 25 per cent in infested pastures. It displaces other types of grass, but is less palatable and nutritious to stock.

The grass also reduces the sale value of stock. Its sharply pointed seeds bore into the skins of grazing animals, damaging the pelt and reducing carcass value. It can also cause distressing wounds, sometimes blinding lambs and injuring farm dogs.

Marlborough District Council has applied to introduce the rust fungus on behalf of a consortium of regional councils and the Department of Conservation.

The fungus – Uromyces pencanus – infects the leaves of Chilean needle grass and competes with them for nutrients, with debilitating effects. Its spores spread rapidly on the wind.

A year-long study in Argentina found the fungus did not spread to plants other than the target needle grass. Other research suggests there is no direct threat to non-target plants in New Zealand, so no native or ornamental plants would be at risk.

This rust is unlike myrtle rust, which infects a wide range of plant host species within the Myrtaceae family. Myrtle rust arrived accidentally in New Zealand, whereas the introduction of U. pencanus would be intentional for a defined purpose – to control the invasive plant, Chilean needle grass.

We will consider the risks and benefits before any decision is made to release the rust in New Zealand.