Under the waves - measuring temperature change in the ocean

A recent assessment of ocean temperature change around New Zealand in the past 36 years shows an overall warming trend.

Hannah Davidson reflects on a scientific paper by researchers Philip Sutton and Melissa Bowen about ocean temperature change, how to measure it and what this might mean for NZ.

An ocean of change

In early 2019 the Ministry for the Environment (MfE) and Stats NZ released their report, Environment Aotearoa 2019. Under five broad themes, nine issues were brought into focus. Each issue was assessed against four criteria to indicate the associated significance and urgency, spatial extent and scale, magnitude of change, irreversibility and lasting effects of change and the scale of the effect on culture recreation, health and economy. It is a synthesis report that brings together the previous domain reports, aiming to present the environment as a whole, in all its complexity.

Unsurprisingly, climate change was one of the five key themes, with issue nine focusing on the ways in which climate change is already affecting Aotearoa New Zealand.

One of the many concerns that comes hand-in-hand with climate change is the effect this will have on a global scale in the oceans. We hear a lot about sea level rise, as ice reserves melt and coastlines begin to recede around the world. Perhaps a less well-known and underlying effect though, is the warming of the oceans. According to the 2013 Intergovernmental Panel on Climate Change (IPCC) report, between 1971 and 2010, the oceans absorbed more than 90% of the increased energy in the climate system. This energy slowly heats up the water, leading to higher ocean temperatures.

Is it getting hot in here?

That’s what researchers Dr Philip Sutton and Dr Melissa Bowen (of NIWA and the University of Auckland respectively) have been investigating, and have recently released a local glimpse into the latest trends in ocean temperature. Published this year in the New Zealand Journal of Marine and Freshwater Research, the article explores ocean temperature change around New Zealand over the last 36 years, estimated using three independent datasets from different measurement techniques which surveyed both the large area of surrounding ocean around NZ, and the closer coastal waters (Sutton & Bowen, 2019).

The researchers collected and analysed satellite sea surface temperature (SST), high resolution expendable bathythermograph (HRXBT) and Argo float data, three techniques that differ in the method of obtaining the temperature data and the depths at which it is obtained.

How to measure ocean temperature change

The first of these, satellite SST, uses Advanced Very High Resolution Radiometer (scientists are great at naming things) data gathered by the US National Oceanic and Atmospheric Administration to estimate SST from space. The radiometer is on a busy schedule on-board the satellite, orbiting the Earth measuring cloud cover and surface temperatures from which to calculate SST. The dataset used has been providing daily SST data since 1981, and the measurement of the upper micrometer scale “skin” of the ocean may be converted to a “bulk” estimate of around 0.5m depth. 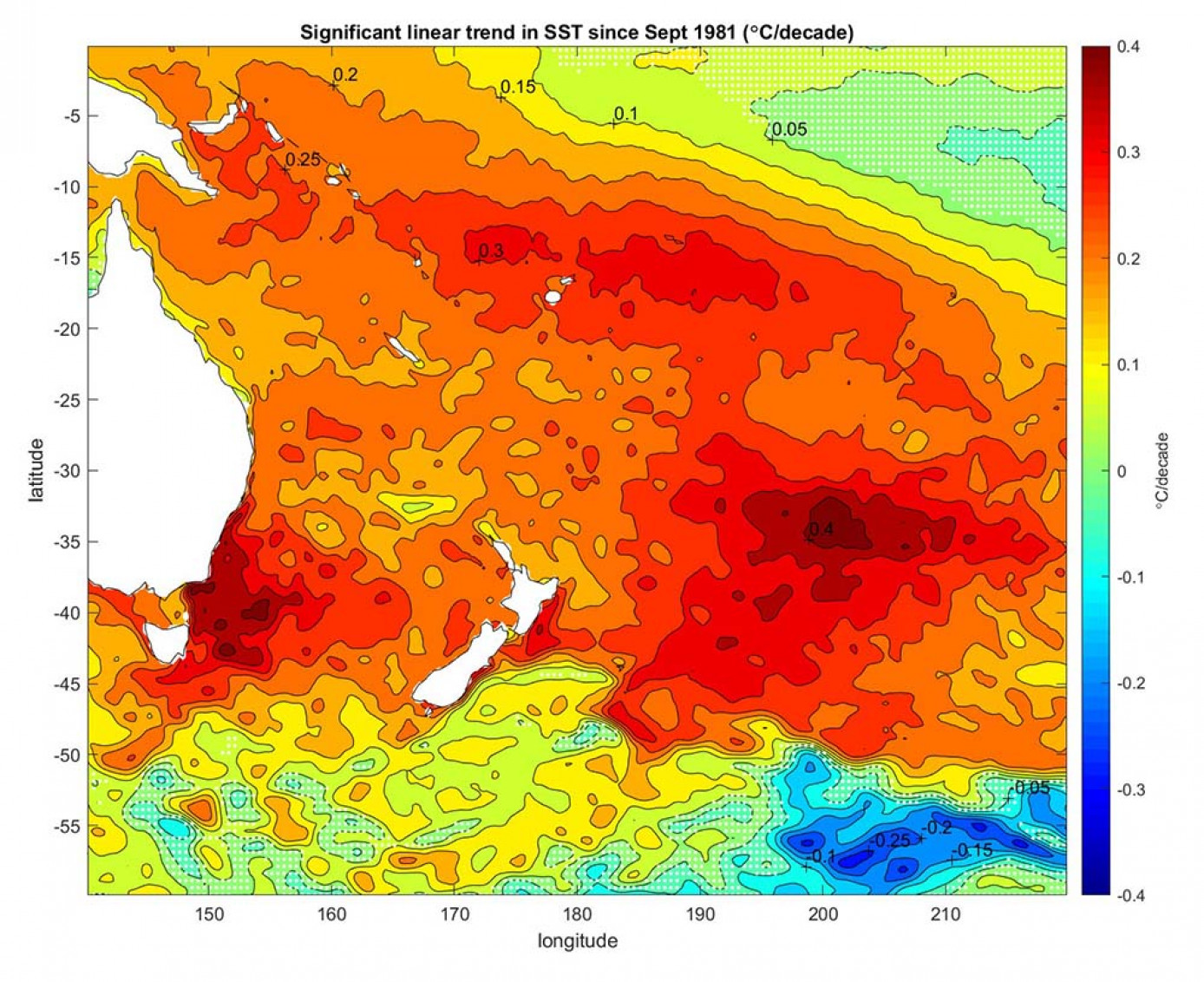 Figure 1: A representation of warming over the study area, where the colour of the area of ocean on the map indicates the degree of warming, from 0.4°C per decade in deep red, or cooling, down to -0.25°C per decade, as indicated by the bar on the right. The data was obtained from satellite SST images and the authors applied this data to calculate the trends. This is an updated version of Figure 1 from Sutton & Bowen, 2019, provided by Dr Phil Sutton.

Coming back down to Earth, high resolution expendable bathythermograph (HRXBT) data was also included, which was obtained from two ocean transects in the New Zealand region, each sampled approximately four times per year. Essentially, this involved throwing hundreds of expendable little probes attached to thin wires over the side of the ships at different points of the transect. These probes fall down into the ocean’s depths at a known rate, and send temperature data back to the ship.

The depth at which temperatures are recorded can be calculated based on the fall rate, and a temperature profile of the water can be determined as a function of depth. The transects have run from NZ to Fiji and Sydney to Wellington from 1986 and 1991 respectively, making them the longest time-series of the sub-surface ocean around New Zealand. Depths down to 850m were examined.

The satellite SST and HRXBT data were compared with a shorter time-series, obtained from a programme of profiling floats called Argo. The programme comprises an army of buoyant little robots that go down to 2000 m depth and back up again on a 10-day cycle, gathering temperature and depth data along the way. Because this data has only been consistently collected since 2004, the authors did not consider it suitable in its own right for this study, however it was used to corroborate and support findings from the two longer time-series.

One of the 3500 Argo floats around the globe being deployed from a boat to begin gathering data in the upper 2000m of our oceans. The data transmitted to a satellite will help us to better understand the variability and state of our oceans and climate. Credit: NIWA

Where the datasets overlap, the authors found good agreement between the different series. Since 1981, north of the Subtropical Front (which separates the southern sub-Antarctic waters from subtropical gyres) there has been statistically significant warming over much of the southwest Pacific, with specific regions of stronger warming associated with ocean currents in the region. All of the ocean around New Zealand has warmed, with the strongest warming close to home off the Wairarapa Coast at 0.32°C per decade. The warming was not just at the surface level, but down to 850m in the Tasman Sea, and to 200m in the waters around New Zealand.

Whilst there was an area of cooling found in the Southern Ocean, east of New Zealand, and several areas of weak or insignificant warming, the overall picture is clear and consistent with global research – the oceans are heating up. This may sound like a great thing for us humans, I must admit to dreaming of entering the ocean near my southern home without grimacing and brain freeze, perhaps even leaving with feeling in my feet!

Implications below the surface

Awareness and engagement with research outputs such as this, along with the implications of such change, are important in framing our decisions as individuals, and across all areas of our work at the EPA. We are teeming with passion and conviction to ‘do good’, and whilst an issue as wicked as ocean warming can be overwhelmingly complex and global, we can all continue to learn about and advocate for our oceans at a local and international level.