The waggling wisdom of bees

Find out how bees communicate with one another, and why understanding the world of bees and other insects is important in protecting them from harm.

By Hannah Davidson and Elodie Urlacher

It is a fresh spring morning, and you stretch your legs as you wait for your sister to return from a food run. It is early September, and you have a busy month ahead. As she floats in the door, you pay close attention to her movements. She begins to waggle.

The timer has begun; each move from now has hidden meaning. You note the direction she dances in, the sways and turns, the number of circles she makes with her stripy, winged body. She is a honeybee, and you are receiving instructions on where to find the good nectar. You launch into the cool air, calibrate your compass, and leave the buzz of the hive behind you.

This so-called waggle dance is one of the most extraordinary forms of communication we know of, and is rich with information. Bees returning to their hive dance to tell their fellow bees where to find food. Key clues about how far away and in which direction a patch of flowers may be found, as well as the quality of the source, are given in a repetitive and impressively precise series of movements. 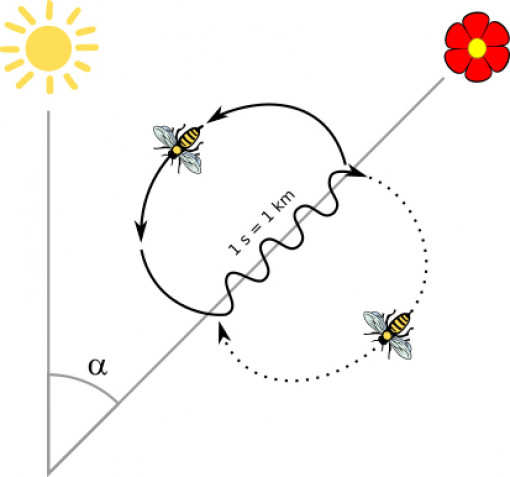 A diagram of the waggle dance - the direction the bee moves in relation to the hive indicates direction, and the duration of the waggle part of the dance signifies the distance.

This phenomenon was first discovered by German-Austrian scientist, Karl von Frisch, who won a Nobel Prize in 1973 for his work on dancing bees, and how bees perceive the world. Frisch was an ethologist – a person who studies animal behaviour.

At the EPA we are lucky to have an ethologist in our ranks, whose interest is also in bees. Dr Elodie Urlacher, from our Hazardous Substances Reassessments team, knew she wanted to be an ethologist from the first time she heard the word at a young age. Her research on the way bees learn, using their response to smell, brought her from labs in France to Otago, and now to Wellington as an advisor at the EPA. Stay tuned for more bee-related updates this month by following our social media channels.

The plight of the honeybee

The study of animal behaviour has important implications for conservation and environmental protection. Knowing how animals such as bees usually behave in the wild, and the complexity of their learning abilities, can help us to catch things when they start to go wrong.

And they are. Globally, bee populations (amongst other insects) are declining at disconcerting rates. This is in no small part due to things like disease (such as those facilitated by the pesky Varroa mite) and habitat change – in fact a recent survey by MPI found that 28 percent of colony loss in Aotearoa New Zealand was attributed to the action of this mite.

But Varroa are not the only threat to bees. Some of the chemicals we use on the environment can also adversely impact bee health. The risk to bees posed by chemicals brings us back to the waggle dance.

Imagine you are flying over fences and pastures, past the hills laden with gorse and sprawling wetlands carpeted with mosses and ferns. You’re not far away; the dance indicated that there should be a lush patch of mānuka within 100 metres of here. You smell the distinctive white flowers peeking from the thorny undergrowth, and lower yourself with a slow-buzz to hover and collect the nectar. Sometime later, you are loaded up and ready to return to the hive. But wait, where was that? Confused and dazed, you follow your wing-strokes, but you are lost. A colony of bees

Research from overseas indicates that some pesticides, including a group called neonicotinoids, can have adverse effects on bees’ foraging and learning abilities and health. Neonicotinoids are a group of chemical compounds that have structures similar to nicotine, and some compounds in this group are used as insecticides. Exposure from spray drifting in the air or movement of the chemical through the environment and food sources can also have an impact on critters that the pesticide was not intended to harm.

Recent reports from international regulatory agencies highlight some risks posed to surface and groundwater-dwelling organisms, and to pollinators, from the use of some neonicotinoid-based insecticides.

The EPA’s role in the protection of bees involves setting the rules on the use of insecticides, so that the risks can be managed. It is important to note that at the time when they were first approved some of the wider impacts of insecticides were not known. When new information emerges about an approved hazardous substance there may be grounds for a reassessment - a formal review of the rules. This was the case for substances containing neonicotinoids, with grounds for reassessment established in early 2020.

We are now gathering evidence, assessing factors like how the substances are used in Aotearoa New Zealand, the benefits of the substances to some sectors of the food production industry, mātauranga Māori, and the impact on non-target organisms such as insects. Evidence from all kinds of sources will inform our decision-makers of the hazards and risks these substances pose to people and the environment, including our pollinating pals. The risks are then weighed against the benefits of their existing and continued use (or possibly restricted use) in New Zealand.

Read more about the grounds for reassessment of neonicotinoids

Protecting bees and other pollinators

The rules and restrictions around how insecticides are used are put in place to help keep bees and other pollinators safe. It’s important that people follow the rules to ensure our waggling bee friends are protected. When using herbicides or pesticides follow the label instructions, and don’t spray chemicals near budding or flowering plants where bees and other insects are likely to forage, or in weather where sprays are likely to drift or spread. That way, we can make sure that as many bees as possible get home safely.

View our guidelines on protecting bees and other pollinators

Elodie did a Bachelor in Biology, and a Master in Neurosciences, Behaviour and Cognition at the University of Toulouse (France) before completing her PhD in 2011. She continued her research on the effect of stress on the learning and memory abilities of honey bees at the University of Otago in New Zealand and is the author of 8 scientific articles. In 2016, she joined the EPA as an Advisor, Hazardous Substances.