The air that we breathe

It can be difficult to grasp the challenges that our atmosphere faces. How can we get to know this big invisible blanket around us? Here we look at the basic composition of the air that we breathe, and the long-range transport of both chemicals and our Principal Scientist.

I once heard that many years ago Mars had a thick atmosphere, but it largely blew away in a solar storm. There are theories that suggest Mars’ lost atmosphere might have supported life, blanketing water on the surface of the red planet.

Hearing of Mars’ loss made me feel quite sad, like hearing about the death of distant but likeable celebrity or a third cousin you never knew.

Luckily, Earth's atmosphere doesn’t appear to be in immediate danger of blowing away, but it does have other problems. It is a closer neighbour to us than Mars’ atmosphere – perhaps we should get to know it better?

In this article, we’ll meet the chemicals that make up the air that we breathe – both the ones that should be there and those that shouldn’t – and look at how some chemicals can travel far and wide by way of air.

Something in the air

The air around us is primarily made up of gases.

Approximately 78 percent is nitrogen, an essential building block for life which cycles between different forms to maintain a perfect balance.

A further 21 percent is oxygen, the fuel of fauna big and small. Oxygen is breathed in by animals and breathed out by plants and other organisms that undergo a process called photosynthesis.

A tiny 0.0419 percent of our atmosphere is CO², which photosynthesising plants and algae use along with sunlight to make their fuel, and which is stored in various forms of carbon. This might seem quite a small percentage given all the hubbub, but the balance is delicate, as we now know. Water vapour is also present in small amounts which vary by region and altitude.

Among this invisible slew of life-giving staples there are numerous other molecules in the mix, like the spices in a recipe. Some of these are essential, despite their small quantity, and must be there in that precise amount (like baking soda – without it the recipe is a flop). Others are optional - their presence and concentration in the atmosphere either enhances the recipe, goes largely unnoticed, or makes things go yuck. For example, airborne particles carrying COVID-19!

Some of these spicy additions can come from human activity. There is a great variety of these molecules and particles, and they can last in the atmosphere for seconds to many years.

When they do stick around in the atmosphere for a long time, they are at the will of the wind and other atmospheric currents and processes. They can drift and travel gigantic distances from their place of origin.

COVID Gets Airborne – Expert Explains How Viruses Travel Through the Air (scitechdaily.com)

When molecules and particles travel distances that usurp the boundaries of countries and jurisdictions, they become difficult to regulate. Some can cause issues such as being toxic to the people and wildlife in locations far from where they were released.

It is for this reason that 184 countries have come together under the United Nations’ Stockholm Convention on Persistent Organic Pollutants. A persistent organic pollutant, or POP, is a toxic chemical which has the potential to stick around in the environment for a long time, causing harm.

The chemicals deemed as POPs under the Stockholm Convention have to meet four criteria:

The EPA’s very own Dr Peter Dawson, Principal Scientist, is the current chair of the Persistent Organic Pollutants Review Committee, or POPRC (pronounced pop-rock). He recently masked up for a journey to Geneva, Switzerland, to chair the international meetings of the POPRC.

During the meeting, 29 members of the POPRC reviewed chemicals that are in the waiting room for being deemed as POPs, or worked together on treatment plans for dealing with chemicals that have recently been admitted to the POPs club as a result of previous meetings.

The 17th meeting of the POPRC was held in Geneva and online from 24-28 January 2022. This hybrid meeting is a good example of just how far technology has come in such a short time to support complex international interactions online.

Particularly remarkable is the management of simultaneous translations from the meeting in English into the 5 other UN languages (French, Russian, Arabic, Chinese and Spanish)!

Peter said the online functionality and the switching between the live and online speakers was pretty seamless, though he noted some inequity for countries with poor internet connectivity and in unfavourable time zones.

A few interesting decisions were made at the meeting.

One was that a UV stabiliser used in some plastic products called UV-328, could be considered to have met the criteria to be a POP, even though the primary mode of long-range environmental transport is via plastic debris and microplastics.

This recognition of microplastics as vehicles for chemicals to travel on (alongside more natural vehicles such as wind, ocean and wind currents and natural particles in the ocean and air) is the first of its kind.

Other outcomes included all three of the chemicals that had been nominated as potential POPs being moved along to the next stage of the review.

They will now be further scrutinized to determine if they are POPs. Amongst these was the pesticide chlorpyrifos, which is currently under reassessment in Aotearoa New Zealand after the EPA applied for grounds to do so in June 2020. 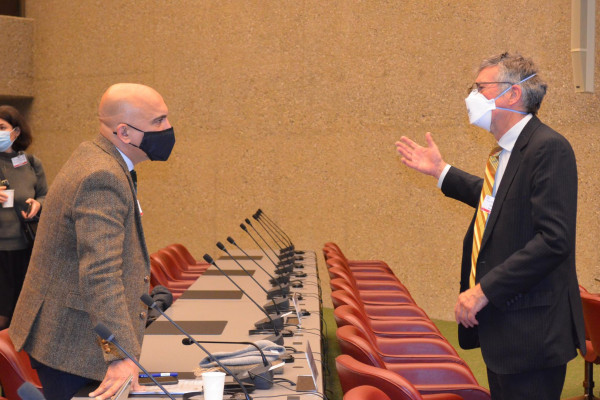 You can find out more about the meeting proceedings, the POPRC, and the chemicals they reviewed on the website of the "Earth Negotiations Bulletin".

The chemicals being reassessed

Ham hails from Otago/Southland, where she completed a Master of Science in Chemistry at the University of Otago, focused on the topic of improving alternative plastic processes. Ham joined the EPA in 2019 as Science Research assistant, bringing a passion for science communication and its role in environmental protection.