On Thursday 19 March, a group of EPA science and community engagement staff met with kaitiaki on Matiu/Somes Island in Wellington Harbour to collect water samples for our new eDNA outreach programme.

All aboard for an eDNA adventure 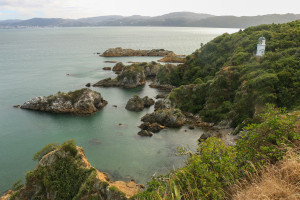 Catching the first glimpse of your destination en route is always an exhilarating feeling. Atop the ferry and whipped by an autumn breeze, we turned our heads to greet Matiu/Somes Island, where we were to stay for the next 24 hours. We were traveling to the island to gather eDNA samples from the surrounding waters. Over the past 5 months we have been piloting our eDNA community engagement program. We have worked closely with Zealandia kaitiaki and the Te Tini o Hākuturi conservation group, and are in the process of shaping the next steps.

At its heart, this program is about building bridges between people and nature. When Terese suggested that we use eDNA to see what species are present around Matiu/Somes Island, we could hardly decline!

Environmental DNA, or eDNA, refers to all genetic material that is recovered from environmental substrates such as water, faeces or sediment/soil. Like ‘genetic breadcrumbs’, eDNA is left behind as critters pass through (or over) the substrate and is derived from sources such as faeces, urine, skin, hair or decomposing organisms. This technology enables us to see what species are present in our environment, particularly our waterways. Arriving on the island, we were welcomed by ranger Jen and had a poke around in our bags for any small hitchhikers. The island is pest-free, and so a thorough check for mainland-dwelling insects, rodents or weeds was well-warranted. Pockets emptied and bags inspected, we embarked on an uphill journey, peeling apart layers upon layers of history as we went.

Matiu/Somes Island is located in Te Whanganui-a-Tara/Wellington Harbour, visible from the shores of the capital, Petone and Eastbourne. In between serving as an island home for various iwi and its return to mana whenua in a 2009 treaty settlement, the island has been used to quarantine both humans and animals, and as an internment camp and military defence position. 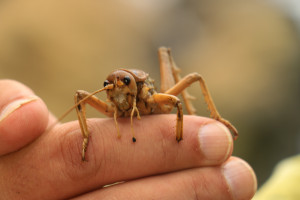 It is now open to the public as a DOC scientific and historic reserve, owned by Taranaki Whānui ki te Upoko o Te Ika. But evidence of its past is scattered around the island, from gun emplacements, to memorials dedicated to quarantined adults and children who never made it off the island, and the holding pens for quarantined livestock, empty but eerily frozen in time.

I think it’s fair to say that we all felt a certain unease being on a former quarantine island in the midst of a global pandemic, which subsequently saw New Zealand go into lockdown. We arrived at our lodgings, and took a breath to both reflect on past, and prepare ourselves for the task ahead.

Something in the waters – collecting water samples for eDNA testing 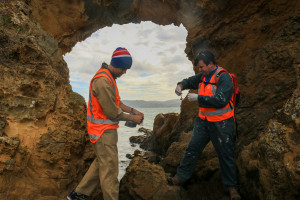 Endlessly wise, Terese had warned us of the way one must adjust to a new kind of time when on an island. Separated from the rest of the world, islands have their own heartbeat. Shifting gears, we pulled on overalls and high-vis and tuned ourselves to this new time.

Following our knowledgeable and trusty guide, Owen, and armed with a backpack-full of eDNA testing kits, we wove our way down bush paths and rocky slopes to the many shores of the island. 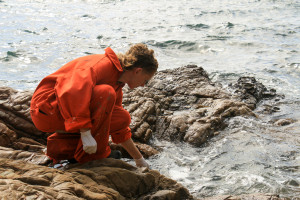 Four hours later, both exhausted and immensely grateful to have explored the island so extensively, we returned to Forest and Bird house, where we were to stay the night. Over an incredible pot-luck feast (shout-out to Shaun’s sister-in-law for what were unanimously crowned the best brownies ever), we took the time to reflect upon the pilot phase of the eDNA programme and its future potential.

Day two – More samples, and leaving the island to adjust to a new way of living In the morning, we had one more stretch of coast to cover. DOC ranger Jeff Hall and his son Finn were keen to help out, and between us we gathered the last five samples.

Finally, it was time to finish what was left of the pot-luck for lunch, and await the ferry which would return us to Wellington. Once processed, the fourteen small filters full of eDNA from around the island will tell us stories that add to its many layers of history, conservation and magnificence.

As a strange inversion, our stay on the quarantine island provided a temporary pause from the Covid-19 realities unfolding on the mainland. Upon return we soon found ourselves adjusting to the actual quarantine restrictions of lockdown; a new kind of island, finding its own pulse. Six weeks in, I’ve found that I am taking more notice of things in the outside world than I usually allow myself to. On those savoured daily walks/runs, I’m getting to know my bubble more intricately – the plants that line the paths, the streams that cut through and how they connect, the places I might be able to spot a pīwakawaka or kererū.

Many people are finding a renewed connection with their own backyard in their confinement to it – a unique opportunity to slow down and observe. It’s something that we should accept earnestly and do our best to hold on to, lockdown or not.

The eDNA outreach programme the EPA is running seeks to empower people to find, and run with, that connection. The quality of much of Aotearoa’s freshwater is in a state of decline, and threatened further by global climate change. The more we can use tools like eDNA to observe and understand these ecosystems, the better prepared we are to protect and restore.

Stay tuned for more eDNA updates, and a chance to participate.