Taking on an eDNA project is an opportunity to deepen your understanding of your waterway ecosystem(s). It may focus on comparing two or more sites, tracking changes over time, measuring the impact of activities that improve waterway health, or to detect species. A kaupapa Māori approach may also guide the project.

Here we give examples of how to design and carry out an eDNA project. It gives examples of some types of projects you can focus on, and things to consider like the location and timing of your testing.

Your project plan must include a defined location, timeframe, and goal. Please tell us how many testing kits you will need for your project. The examples we give here will help you calculate how many kits you’ll need.

Doing six syringe kit tests is the best way to get robust and effective survey results of your local waterway. We call this a ‘six rep kit’ and we use it as the basic building block for the design of more in-depth eDNA projects.

The number of kits recommended for each example are: 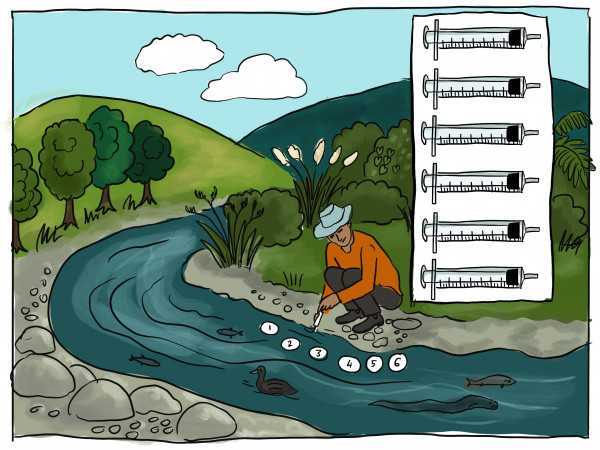 Collecting baseline data is like snapping a 'before picture’ at a point in time. You can compare any future test results to your baseline to see if anything has changed.

To collect baseline data for a site, take one six-rep test. Use eDNA data to compare two or more sites. You could compare two different streams, shores or estuaries that have different environmental influences in your community. You could also compare sites on the same stream or awa.

To make comparison of two or more sites, take a six-rep kit test at each site. This involves taking samples at the same place over a series of set time intervals, for example, yearly sampling; seasonal sampling; or even monthly sampling if you are looking to detect severe changes.

Our eDNA project fund can get you started to monitor over time, but please note our upper project fund limit is four six-rep tests per project (24 syringe kits). Match-funding can increase the size of your project.

To monitor a site over time, take one six-rep kit per timepoint. If the focus of your group is the detection and protection of a specific species, such as whīo or native fish, for example, an aim of your eDNA project might be to find out where they are present (or absent) within a catchment or project area.

Similarly, if you have a large pest and predator monitoring focus, your sampling could coincide with areas where you would like to survey for pests to better understand where populations might be residing.

If you are looking to detect land-based animals or things that don’t live entirely in the water, using some of Wilderlab’s passive samplers might be a better option for your group. Please indicate on your project proposal if you'd like to use a passive sampler.

To investigate species distribution, take 1-3 six-rep kits at different sites within the area, or use 1-3+ passive samplers overnight per site. You can detect eDNA up to around four kilometres upstream using a test kit. If your baseline is for ongoing monitoring, consider whether the site is accessible at the times you'd like to sample.

If you are testing at different times, ensure you can still access your waterway at those times. Choose your
sampling site in an area of moderate to fast water flow, slightly below the area you are most interested in sampling.

The best place to sample is in moving water, where eDNA is delivered regularly, and is well mixed in the
water.

Testing at more than one site

Think about how you can make the sites as comparable as possible. Choose sites that have a similar flow
rate and surroundings.

Try to collect the samples on the same day (or close to) so your results don’t reflect differences because of weather, for example, rainfall.

If your sites are on the same awa, leave at least 1km between each sample site, or sample at different tributaries where the water being sampled is coming from different areas in the catchment.

The timing of your eDNA sampling should align with the objectives of your project.

It is important not to compare apples to pears. If you are gathering a baseline for ongoing monitoring,
think about what time of year is best to do this, and whether you need a baseline for each season.

Avoid sampling during unusually high or low flow or water levels (such as after heavy rainfall or a drought).
As a rule of thumb, it’s a good idea to wait two to three days after a major rainfall (or until the river returns to a ‘normal’ state), as rain can influence eDNA results by: