Residents band together for a Wellington Stream

Following repeated pollution in their local stream, locals have banded together to provide information and access to the stream for their community, using eDNA in the process.

Trickling between steep-sided banks in the hilly suburbs north of Wellington City, lies Tyers Stream. It flows from up above Khandallah Park to the harbour, understated and largely unseen, catching water from Khandallah and Broadmeadows and shuttling it down past back gardens and bush reserves.

In Tyers Stream Reserve, it runs through creases in the forested land, a natural waterfall bursting over an old dam, passing tree ferns and kawakawa. To look that closely, though, it’s a bit of a scramble. Loose rocks, on loose gravel; the banks are steep and unstable. It’s not the safest place to be clambering around.

“It’s all part of the magic,” says Lynn Cadenhead, who was delighted to find the stream at the bottom of her garden when she moved to Wellington in 2015.

Lynn is part of the Onslow Residents Community Association, or ORCA, made up of neighbours from diverse perspectives and interests dealing with local housing and infrastructure, community resilience and the environment. She has become a passionate advocate for Tyers Stream after noticing occasional pollution affecting the waterway, which she visits most days.

ORCA talks to Greater Wellington Regional Council and Wellington Water about the pollution, and is on a mission to increase public knowledge about Tyers Stream and reduce the pollution through community engagement.

Mahi is organised through a Facebook group, which facilitates planting and weeding in the area managed by Wellington City Council. Together, these flaxroots community groups are working towards a connected community of people and biodiversity. 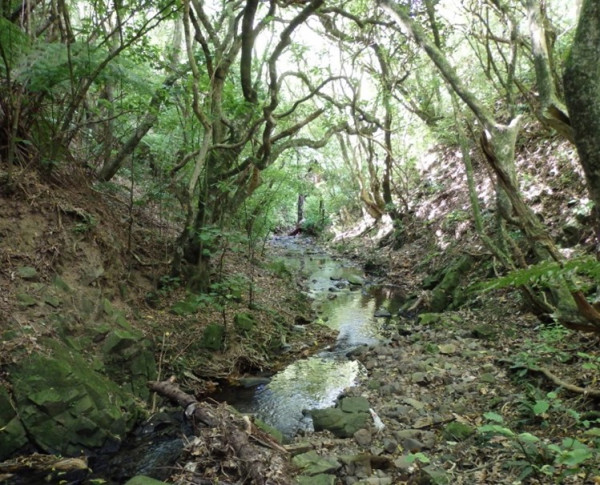 The head of Tyers Stream

ORCA held a free, all-welcome event on 15 September at the Khandallah Town Hall called ‘Looking after our waterways’, which was well attended.

Members of ORCA heard about Wai Tuwhera o te Taiao and eDNA sampling while doing a fish identification course with Mountains to Sea Wellington and were excited to try it out in Tyers Stream. They took two samples; one immediately above, and one below the reserve. The group was interested to compare the results with fieldwork they had done to determine a macroinvertebrate community index (MCI), which reflects water quality, and fish and bird sightings in the area.

The eDNA samples identified a large variety of aquatic invertebrates that had not been picked up using previous field techniques. The group observed that some invertebrates from the sample in the upper catchment (for example, NZ spiny-gilled mayfly, a species with medium sensitivity to pollution), were missing from the sample in the lower catchment, which supported the more detailed evidence they obtained from the MCI fieldwork.

The sample picked up fish species they had observed before, such as banded kōkopu, kōaro (climbing galaxias) and tuna (eels). A Wellington tree wētā and kiwifruit were detected in the lower stream sample.

A 23cm banded kōkopu in the stream

Results also included DNA from Norway and black rats, stoats and weasels which, the residents thought was unfortunate given the amount of trapping carried out in the catchment. OCRA members gathered to discuss the results and talked to Predator Free Khandallah about the stoats and weasels. They found the results useful evidence and helped them connect with other groups that share similar goals.

This small taste of eDNA has left ORCA wanting more. They’d like to use replicate testing to create a more comprehensive baseline for the catchment. Combining this with fish identification and counts and the macroinvertebrate community index would give them a strong footing for future monitoring and engagement with their communities, and with organisations which govern or impact the stream. They’d also like to connect more residents to the stream in their backyards and are looking at ways to improve access.

“The reserve is a hidden gem,” says Lynn. “When you’re up there it feels like you’re somewhere undiscovered.”

Recently, the Tyers Stream Facebook Group hosted a Heritage Week walk to the old dam in the reserve, a picturesque structure built in the 1920s. Walking through the wild bush, residents could see and connect with this stream where their stormwater ends up. They could talk about things as local as car-washing runoff to global issues such as climate change, and how these can impact the spaces we inhabit.

Using eDNA has been another way to peek into this ecosystem and support the great mahi that the community is doing to protect Tyers Stream.

The eDNA results for the two samples are publicly available on the Wai Tuwhera o te Taiao map.

You can find out more about ORCA and Tyers Stream using the links below:

If you would like to contribute a story, photos, art, or reflections for this e-pānui, please get in touch with us.