Kids restore the Kepler, and discover a rare species in the process

Nestled within ragged mountains, moss-strewn bluffs and fiords sits Fiordland College, in a small Southland town named Te Anau. The College sits on the edge of town, just before the road winds north to Piopiotahi – Milford Sound, and is shadowed by Mt. Luxmore to the west over the lake. It comes as no surprise that the Fiordland College students have a long history of integrating their distinct surroundings into their learning.

Fiordland College students have been testing the health of two local waterways since 2016 –a stream draining farmland north of Te Anau into the lake called the Ewe Burn, and another, nicknamed Taiaroa Stream, which flows into the upper Waiau River. This stream drains Fiordland native forest.

Every year, their Year 10 students (aged 13 to 15) have used a NIWA Stream Health Monitoring and Assessment Kit (SHMAK) to measure physical properties of the two streams, such as clarity, temperature, nutrient level; and biological properties like stream life and habitat assessment. It is another handy tool used by many streamcare groups.

The Year 10 students undertake this mahi as part of a larger initiative, Kids Restore the Kepler. This initiative involves Fiordland students aged 3-18 from four schools in the area learning about and looking after the Kepler Mountains.

Check out the Kids Restore the Kepler webpage 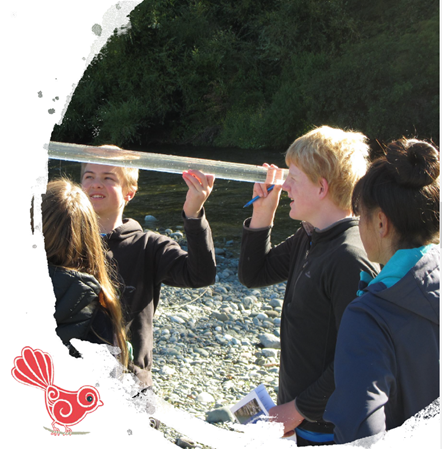 This year, the education coordinator of this programme, Alessandra Menegatti, reached out to us at the EPA to see if they could be involved in Wai Tūwhera o te Taiao – Open Waters Aotearoa. Their stream testing trip was scheduled a little before our kit-posting date, but we could hardly say no to this awesome kaupapa, so we sent two eDNA kits to the group early. The students used their eDNA kits, along with the SHMAK kit, to compare the two different streams. The data obtained will allow the students to produce a comparative report, which will be assessed as a Level 1 Science project. The students enjoyed their day out immensely, with many commenting on the value of using eDNA to learn about things you may not know existed otherwise - such as freshwater jellyfish.

Their results gave evidence of some really neat stuff present in the streams; kōaro, gollum galaxias, tuna (longfin eels), and aquatic midges, worms and springtail. The students knew about the presence of kōaro in the bush stream, and the longfin eels in the Ewe Burn, but were pleasantly surprised to find the gollum galaxias, a very special but at-risk native fish so close to Te Anau.

This prompted the group to get in touch with NIWA and the Department of Conservation, who confirmed that the species were previously undetected in that area, indicating the sneaky gollums are probably more widespread. One student said, “It was really fun exploring the streams. I liked finding out more about different kinds of water dwelling larvae and small native fish. I think it's a great idea to keep doing it as it's a good educational tool to teach people to respect our native species. I even learnt about animals I didn't know existed.”

“It was cool to see how powerful eDNA is when trying to identify species in an ecosystem. We passed only a few litres of stream water through the filter, yet it picked up on hundreds of species. It was cool to see species discovered in an area we thought they no longer existed,” said another.

For their assessment, the Year 10 students will focus on the invertebrates (like insects, worms and snails). Certain species are given sensitivity scores based on how tolerant each organism is to the changes in its environment, which helps the students assess the water quality of a stream.

“The eDNA data, together with field measurements and observations, provide the students with an incredible source of scientific information to complete their Level 1 Science Internal Assessment,” says education coordinator, Alessandra Menegatti.

“And it doesn't stop here, as the eDNA data analysis also provides a wonderful example of contextual learning, where students are able to construct meaning based on their own experiences. Suddenly DNA sequencing comes to life for them... so special to witness.”

Read the article on the SouthlandApp webpage

The group has chosen to share their results with the public, and you can check it out on the Wai Tūwhera o te Taiao map.

The Stream Study programme has recently developed into an intercurricular/interdisciplinary collaboration between the Fiordland College Science and English departments. To communicate the science they are learning about, the students hone their writing skills to create contributions on their webpage about local critters and fauna in a series called Meet the Locals.

Thank you for sharing your story and reflections with us Fiordland College, and for the awesome mahi you are doing.

If you would like to contribute a story, photos, art, or reflections for this e-pānui, please get in touch with our Science Communicator at eDNA@epa.govt.nz